"Ortus: A rise, beginning, coming into being, born, the origin!"

We are pleased to announce that the first Release Candidate of CommandBox 5.0.0-RC.1 is now available.  This release started as 4.9.0-alpha, but we decided to go ahead with a major version bump due to some major updates in our Java libraries.  Most notably, Lucee 5.3 and Java 11 support.  Please help us test this RC.  If no issues are found, we'll turn it into a final release.

The Gitbook docs have been updated with the 5.0.0 changes on this branch:

You can download the new binary from our artifacts server here:

And the latest Command API docs are available here:

Even though this is a new major version, it should be very backwards compatible.  CommandBox proper has no known backwards compatibility issues we're aware of, but note we've bumped libraries like Lucee Server, Undertow, and Java support, so you may notice differences due to these 3rd party lib updates.  For example, one breaking change in Lucee 5.3 (which now powers your default server) is how page output buffer is handled.

You should be able to simply replace your box.exe binary and run it to get the same in-place upgrade you're used to.  If you run into issue, you can try removing the "engine" folder in your ~/.CommandBox folder and try again.  If you need to downgrade for any reason, replace the box binary with the old version, remove the "engine", "cfml", and "lib" folders in your CommandBox home and they will get re-created on the next run.

You may also notice the box binary is larger now.  From 44 Megs up to 77 Megs.  This is a regrettable byproduct of us turning off the Pack200 process we used to run against the Lucee jar.  Lucee seems to have some bugs that causes it to re-download a bunch of OSGI bundles when we compress them and we can't figure it out, or get support on the matter, so for now we're just not compressing as much stuff.  This was a huge blocker for anyone needing to run CommandBox on a PC with no external internet access as Lucee provides no mechanism to turn off it's auto-download behavior.

And finally, if you have installed any custom OSGI bundles into your CLI, they will be wiped by the upgrade process now.  We didn't want to have to to do this, but Lucee has bugs that cause errors when doing in-place upgrades with the old OSGI bundles left in place and we couldn't get it fixed, so this was the only way to ensure in-place upgrades would "just work" without errors.  We are leaving the Lucee engine folder, so any settings you may have put into your CLI should remain in place.

There's a lot of new stuff in CommandBox 5.0.0.  Here's an overview.   One of the biggest new "features" is you can finally use CommandBox on Java 11+.  This was not possible in CommandBox 4.x due to the version of Lucee not fully supporting newer versions of Java.  Now that Lucee has been bumped to 5.3 (see below) you are free to leave java 8 behind for the CLI.  Note if you're using CommandBox to start up older versions of Adobe CF or Lucee/Railo, you may still need to use java 8 specifically for your servers.

Let's start with the library updates.  For the most part, all the jars we bundle are a "black box" but in reality, every update is usually for new features, fixes, or security patches.  Here's an overview of the new libs:

You can now use user/pass or personal access token authentication when cloning Git repos over HTTPS.  This has been tested with Github and Gitlab and is an alternative to SSH keys.  Please check the docs, as Github and Gitlab both expect slightly different inputs.

There is a new Lex installation endpoint to help you acquire Lucee Extensions your app needs via the "install" command or a dependency in your box.json file.  If the current directory has a Lucee server in it, CommandBox will install the extension file directly into your server's "deploy" folder (server context)

The auto-install feature into your server will work on any Lex package, even one coming from ForgeBox:

Tuning your server is easier now.  You can configure your Undertow worker-threads setting with first-class server.json property

Which gives you this in your server.json

We've also unlocked a method for you to set ANY valid Undertow option or XNIO option.  So if Undertow supports it, you can configure it!

We've added a new experimental feature that lets you create a batch file, powershell script, or bash shell script that directly starts a server with the exact settings that you get from "server start".  This is for you to create super-optimzed startups in Docker or Service that bypass the CLI steps and "lock in" the settings.  No server.json or CFConfig, or dotenv code will be processed, but you will have a fast streamlined start that is the same every time.  Couple this with our new "dryRun" flag on server start that will unpack the CF engine, but not actually start the server, and you can create your customs start script like so:

We've got a couple new handy commands to help you from the command line, "unique" (modeled after the Bash "uniq" command)

And "sort" (modeled after the Bash "sort" command)

The tray icon for your servers now has a new option under the "Open" menu that will open up the file system folder where the server home lives.  This is nice for finding your CF Engine's log files. 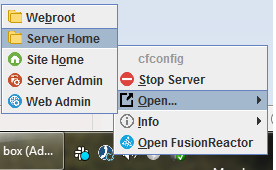 There are a lot of bug fixes and even more enhancements I didn't cover above.  You can read the full release notes here: